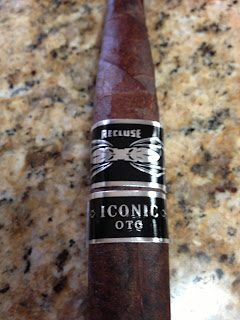 It is always great to see a new company emerge within an industry. In the cigar industry, they tend to bring a breath of fresh air with them, and creativity with that. They begin as this boutique company that is found only in certain stores throughout the country, and if you are a fan of them early on you begin to see their growth throughout the industry and become a serious player in terms of humidor space. I was honored when I was gifted some pre-release smokes by Iconic Leaf, so when their cigar rep. was in my area I was glad to speak highly of them and their products to my store to have them come in. I am glad to say that Recluse by Iconic Leaf Cigar Company has landed at Havana Phil’s, and with their regular vitola smokes also came the first of its kind and most unique vitola.

This first of its kind vitola is called Kanú, and it looks like a kayak the way it is shaped. It is a true perfect, but box pressed and finishes with a lovely pigtail cap. It is really aerodynamic in hand, and you almost don’t want to smoke it. There are three styles of this line, and I selected the Kanú #1. Not only is this the first of its kind in terms of a vitola, but it is also a brand new release. The cigars were shown at the 2012 IPCPR and had their kick off at Outland Cigars some weeks back. It has been a great year for maduro cigars thus far, so I am excited to see how this cigar does in that department as well. I thought the Toro vitola was out of this world when I first reviewed it, and since then I have still been loving and smoking them.

The cigar, like the rest of the line, is made in the Dominican Republic at a new factory, Tabacalera Leyendas Cubanas. The factory is run by Don Jose Rafael, and he has learned his skills from his experience over many years, and from generations of family members before him. It has been said that this man would rather cancel a contract or walk away from a deal if asked to make cigars of lower quality than he demands of his cigars. I am not sure where he worked before, but after smoking these cigars it was a top quality factory. All tobacco that has gone into this line has gone through eight separate fermentation cycles, and I mean the wrapper, binder and filler, no corners were cut. The cigar begins with filler tobacco from the Dominican, many seed varieties  and is then covered with a Cameroon binder. I love when you see a Cameroon binder with a cigar by the way. Above that is a gorgeous wrapper leaf that is Brazilian Maduro. The cigar measures 6” with a 54 ring gauge at the middle, and is a box pressed perfecto. The cigar has a dark Colorado Maduro coloring to it, and there are tons of oils present to touch. It is veiny and toothy as well, and I am getting aromas of wood, spices, cocoa notes, pepper and earth flavors.

As I light up the cigar the flavors have a slow start, but the further I get into the cigar the more I pick up. I am definitely picking up some sweet spices, cocoa and earthy notes, and there is a bit of leather present with that. The further I get in though I begin to pick up some herbal and citrus notes, and they become more and more present. The first third is showing some solid construction notes and I am getting a lovely burn line with the cigar. The draw is slightly firmer than some would prefer probably, but you could cut more off the cap to open it up. I am getting a lovely ash that is light gray in coloring, and it is holding on fairly well. I would say to me the strength level is right at that solid medium body level, and is definitely a cigar that catches your attention with the flavors. Overall, I am getting a great flavor profile from the wrapper, and I am loving it. As the ring gauge increases in the second third the flavors become more and more complex and there is a lot going on. Those citrus notes are really pairing with the cocoa notes from before, and the wood and leather notes are balancing the mineral aspects as well. I am still getting a rich flavor profile and it is finishing with lovely spice and earth notes. In the second third the burn line is perfect, and it is producing that great light gray that is holding on to the cigar well. The draw has really opened up as the cigar is now smoking at that 54 ring gauge mark, and it has been a cigar that has had a cool draw throughout. I would still say that the cigar is smoking at a solid medium body level, and in some ways feels softer and cooler in this third because of the larger ring gauge. There is definitely a change in every aspect in the second third, and it is a nice change.

As the tapered end makes a return the flavors begin to become more concentrated once more, and I am seeing a faded flavor profile of citrus, herbal and mineral notes. The leather notes have faded as well, and it is really showing a finishing flavor profile of cocoa, rich earth, wood and spices. The cigar is coming to a close and along with the flavors still being very present, the construction is remaining wonderful. The draw is getting a little bit tighter as the ring gauge is decreasing, but it is remaining cool and the cigar is very enjoyable. The ash is still showing that light gray coloring, but as the cigar is getting shorter and thinner it is falling off easily. The strength level has increased some to that medium full level, and the finish is lovely. I am getting tons of flavors on the finish still, and it is a definite lip burner.

I am a fan of perfecto vitolas, and that is because they are fun to begin with, but because you also get to see the impact of the wrapper and filler tobacco on the cigar. It was great to see the draw as well change from beginning, to middle, to end, and still perform wonderfully. I felt that the flavors were lovely as well from beginning to end, and you really say a lot of fluctuation throughout. This is a cigar that is a fun and special cigar, but at the same time a cigar that is educating. If you want to see the impact of certain tobaccos in a cigar, this is a way to learn and experience that. I am a big fan of the first line by Iconic Leaf, and if there next production is as a good as the Recluse we are all in for a treat. I give this smoke a solid 92, and will definitely enjoy more and more of these unique smokes down the road.