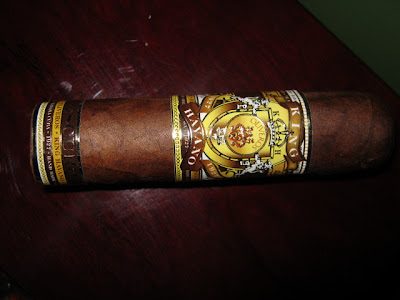 This short stout cigar was a lovely treat this afternoon. I don’t smoke many Oliveros Cigars, in fact the last one I smoked was a couple years back and it was the El Padrino Edicion Italiana and that was great. I don’t have anything against their cigars they just don’t catch my eye often, but the King Havano line really intrigued me. The line is made with entirely Nicaraguan tobacco from the three prominent regions, Esteli, Jalapa, and Condega, and it is said to be entirely ligero. The fillers in this cigar are the same as the Maduro Fuerte blend, but the difference is that the habano wrapper has been fermented longer to be smoother and milder. The wrapper itself was chocolate in color and had a nice glossy shine to it.

The cigar had nice earthy characters to it, I picked up lots of dark chocolate, but it also had a nice espresso flavor and vanilla as well. From the foot on I picked up this semi-spice flavor which was constant and pleasant. This was a fun and relaxing smoke, and was medium to full in body. Although it would not be in my daily rotation, I know there are some who would place it there. I think in the future I might grab another vitola from the line, possibly the torpedo or corona, but the Jester was still enjoyable. I would give it 89 points. Give it a try at Cigar.com