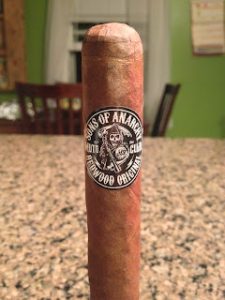 If you have watched Sons of Anarchy then you know how much of a badass Ron Perlman looks as he portrays Clarence Morrow, one of the First 9, smoking a cigar. In the show you see him talk about Camacho cigars in one of the episodes, but whatever he is smoking you can tell he is a true cigar smoker. It looks like he is smoking robusto extras and whenever watching the show, and he lights one up, it makes me want to light one up. This is not the first show to have its own cigar, everyone knows the CAO The Sopranos Edition, but this particular cigar grabbed my attention. I am a huge fan of the show and I know the guys who were behind this cigar know what they are talking about and how to blend cigars.

Released in five vitola offerings, I chose the Toro offering for this review. One cigar takes the name Prospect, an homage to the show, but the rest take your standard names. I want to name this one Nomad though, paying homage to the nomad members of the club. The cigar is made in Honduras at Raíces Cubanas, and this is the location where all Black Crown cigars are made. The filler for this blend is a mixture of Nicaraguan and Dominican tobacco and it has a binder that is Criollo ’98 binder. The wrapper for this cigar is a unique leaf from Ecuador that is Arapiraca Habano. The Toro measures 6″ with a 54 ring gauge and and showcases the logo of Sons of Anarchy on the band. The cigar sports a wrapper that is marbled brown in coloring and is simply a pretty cigar. It is between Colorado and Colorado Maduro in coloring and has a nice bit of tooth present on the wrapper. There are some veins showing and it is smooth without any oils and producing an aroma of chocolate, cedar, tobacco, cherries and wood. 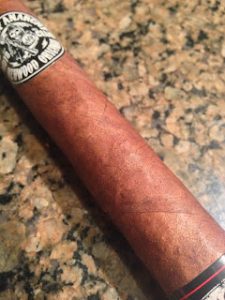 The cigar shows some lovely flavors and it is a very smooth cigar. I am getting some solid oak and tobacco notes, but it is also accompanied by some cherry and stone fruit qualities. There is a little bit of spice on the finish, but it is mostly a chocolaty and creamy finish. I am really digging the flavors and while I expected it to be stronger, I like the road it went down. The construction on the cigar is phenomenal and I am getting a razor sharp burn line with a  beautiful ash that is holding on firmly. The coloring is that of charcoal and there is a lot of smoke being produced with each puff as well. I would say that the strength of the cigar is at a medium level and the body is just above medium but not quite medium full. To me it is a cigar that I could smoke in the morning or evening and enjoy thoroughly. 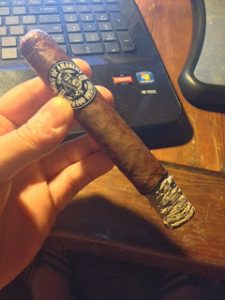 In the second third of the cigar it continues to show the enjoyable flavors from the first third and it is a flavor profile that is balanced and well rounded. There are a lot of subtle flavors present, and they each show their characteristics throughout. There is a earthy, chocolaty and cherry flavor profile that is balanced by a tobacco, woody and spice flavor profile. I would say it is on the “richer” side of the spectrum but just barely. As I said earlier the strength of the cigar is at a medium level and the body in this third is still between medium and medium full, but gravitating towards medium in body. The construction on the cigar has been spectacular and it has shown a razor sharp burn line with a solid charcoal ash. Each draw produces a great amount of smoke and is very cool at the same time. I am digging this cigar and find that it is an excellent cigar for the value. 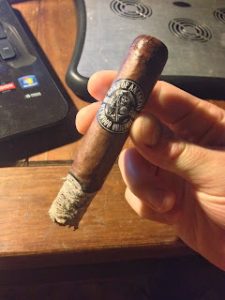 I am in the final third now and it is in this third that the cigar begins to show the most change in terms of flavors than any part of the cigar. It is here that the cigar loses some of sweet characteristics that were present in the first and second third. I would still say that the cigar is rich overall, but not as sweet. The cocoa notes have become more earthy than anything and it is pairing well with the oak and tobacco notes. There is still a faint bit of spices present as well, but nothing major. While there is a change in the flavors the body and strength remain fairly similar to before and it is a nice level in my opinion. The strength is right at medium and the body is right below medium-full. In terms of construction, the cigar still has that razor-sharp burn line and that lovely charcoal ash holding on firmly. The final draw to the cigar is cool and flavorful and like before, it is producing a nice bit of smoke. 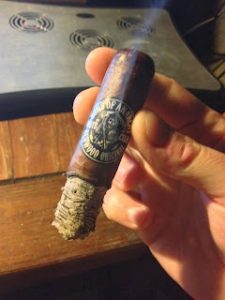 Sons of Anarchy is a smooth cigar that is balanced and flavorful. To be honest with you, I was expecting this cigar to be significantly stronger than it was. I wasn’t disappointed by its lesser strength but was completely surprised. What is remarkable about the cigar is the wrapper and even with a 54 ring gauge you can pick out its qualities. With each draw, I was getting all the great qualities of the tobacco used in the cigar and I could even pick up those terrific Criollo flavors that I know and love. This is a cigar that many smokers can reach out to and enjoy. It will grab the attention of connoisseurs like myself, but will also speak to the novice smokers who want to try the cigar because of the show it revolves around. The pricing on the cigar is amazing, the construction is great and the flavors are enjoyable. I am giving this cigar a solid 90 rating and I look forward to lighting them up while watching the show. 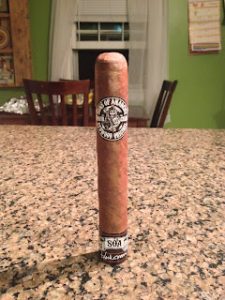